Home // Past Productions // And Then There Were None

And Then There Were None 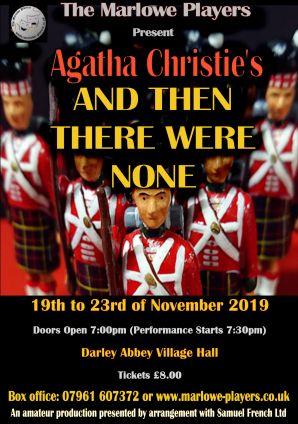 Lured and trapped on an island by the mysterious U.N. Owen; ten apparent strangers find themselves accused by their unseen host of hiding guilty secrets.

When one of the party dies suddenly it quickly becomes apparent that they have been murdered, while the remaining guests are all in danger from a killer who can seemingly get to them wherever they are and who begins to pick them off one by one.

With every death following the lines of the nursery rhyme Ten Little Soldiers, the survivors take steps to protect themselves; but with a quick escape seemingly impossible, will the hidden killer be found before they can finish their rhyme?